When Do You Start Showing During Pregnancy?

You may have heard that first-time mothers-to-be tend to show later, and second-time mothers tend to show sooner. That is true to a degree, although it depends on a variety of factors, such as your weight and body type at the time of conception and the baby’s position in your uterus.

On average, pregnant women begin showing during the second trimester, around 12 to 16 weeks. Normally, your uterus is the size of a lemon. By weeks 14 to 17 of your pregnancy, it’s about the size of a small melon and has risen above the pelvic cavity, making it visible above your waistline.

At this point, you’ll probably need to shop for maternity clothes if you haven’t done so already.

Early in pregnancy, some women have a “come-and-go” belly. Your belly may feel expanded one day and the next day, after you’ve had a bowel movement, it disappears. This full belly-flat belly phenomenon, while a little unsettling, is normal.

It is easy to confuse gastrointestinal issues, such as bloating, with a growing uterus. Although your uterus is growing, its growth is slow and is usually not noticeable to those around you, at least not until your clothes can no longer hide your belly.

Ultimately, each woman and each pregnancy is different, and there is no way to predict when you will start showing. Not showing until late into your second trimester or even your early third trimester is perfectly normal.

Showing during the First Trimester

Some women, even first-time mothers, may show early. This can be disconcerting. You may fear that you’ll get “too big,” if you feel you are big already. On the other hand, early visible proof of pregnancy can be reassuring. Other than a positive pregnancy test, the only confirmation you’ll have early on that you’re pregnant comes at prenatal doctor visits, where you can hear the baby’s heartbeat or have an ultrasound examination. You won’t start to feel baby’s kicks until about 18 to 20 weeks, well into the second trimester.

You may be showing early for any of a number of reasons:

Bloating and constipation: This is common in pregnancy and is often accompanied by gas. Bloat is caused by a digestive disturbance that results in fluid or gas build-up, which causes a distended abdomen. Bloating very early in pregnancy is partially caused by the increase in your hormone levels, particularly progesterone. Progesterone causes smooth muscle tissue in the gastrointestinal tract to relax, slowing down the digestive process. While the slowing of digestion ensures that your baby receives the nutrients from the food you eat, it can cause bloating and constipation.

Less muscle tone: Having tight or toned abdominal muscles is beneficial if you want to hide your pregnancy as long as possible. Those with less muscle tone in the abdomen tend to show earlier. This often includes mothers who are pregnant with their second child. They already have stretched abdominal and uterine muscles, and thus tend to show earlier.

Second pregnancy: Once you have had a baby, your uterus will not return to its previous size. This gives the uterus a head start in growing during the next pregnancy. Many second-time mothers will show about a month sooner than they did the first time around.

Overeating and early weight gain: When someone says, “You’re eating for two,” you have to remember that one of you is the size of a peach. If you have been eating the amount of food that two adults would eat, then you are overeating. While increasing your food intake is important, too much weight gain early on could lead to problems later.

Wrong dates: If you are feeling a bulge where you didn’t before and have been told that your uterus is bigger than it is supposed to be, it is probably because of a miscalculated conception date, meaning that you are farther along than you think. This may happen to women who are not expecting to get pregnant or who are not tracking their menstrual cycles. Your doctor may order an ultrasound examination to check the size of your uterus and gestation date.

Small build: A petite woman may show earlier simply because of her small frame. Her protruding belly may be noticeable to her partner, family, or close friends, but would probably not be noticeable to anyone else and easily concealed by clothes.

Carrying multiples: Some women who are carrying twins will notice a significant increase in their belly size early in the first trimester. However, it is the size of your uterus that counts, not the size of your abdomen. A large belly is not a reliable sign that you are carrying twins—you could have a large belly because of the other reasons described above. If your doctor finds that your uterus is growing more rapidly than expected for your due date, a multiple pregnancy may be the cause.

Showing during the Second Trimester

Most women, regardless of their body type, begin showing during the second trimester. Many women see a noticeable change at the start of the second trimester. As their pregnancy symptoms decrease, their bellies grow larger. It is at this point that working mothers-to-be need to ask themselves the question, “When should I tell my boss and coworkers?” This is a personal decision, but it is best to break the news before your baby bump becomes obvious.

Reactions from coworkers about your pregnancy can be mixed. If they will have to cover for you while you are out, there may be some resentment. No woman deserves to be treated unfairly at work because of her pregnancy. If you feel discriminated against and your supervisor or human resources department cannot help you, you can contact the US Equal Employment Opportunity Commission to help you determine whether you have a legitimate complaint.

Other reactions are less serious but still annoying—like when coworkers and friends give you unwanted advice about pregnancy or feel the overwhelming need to touch your belly. You will have to use your judgment when deciding how to respond to these intrusions on your time and space. A polite “thanks” with a smile is always appropriate for unwanted advice. Unwanted belly touching is always inappropriate, however, and it is perfectly acceptable to say to the person, “I would rather you didn’t touch me.”

Showing during the Third Trimester

If you haven’t started showing and you’re in your third trimester, do not panic, especially if your doctor is not concerned. Some women do not show until late in their pregnancies. And showing late does not mean that your baby is too small. It may be due to your body type. Some women do not gain as much weight while pregnant, regardless of whether they were larger or petite before pregnancy. Your doctor may order an ultrasound to determine whether your due date is correct. Even if your baby is smaller than expected for his or her gestational age, you can still have a perfectly healthy baby. Your doctor will probably monitor you more frequently to make sure your baby is doing well.

Check out our When Do You Start Series:

Feeling Pregnancy Symptoms Throughout Your Pregnancy

When You Should Take Maternity Photos

Which week are you in? Check out our pregnancy calendar and learn more about the changes taking place in your body and with your developing baby. 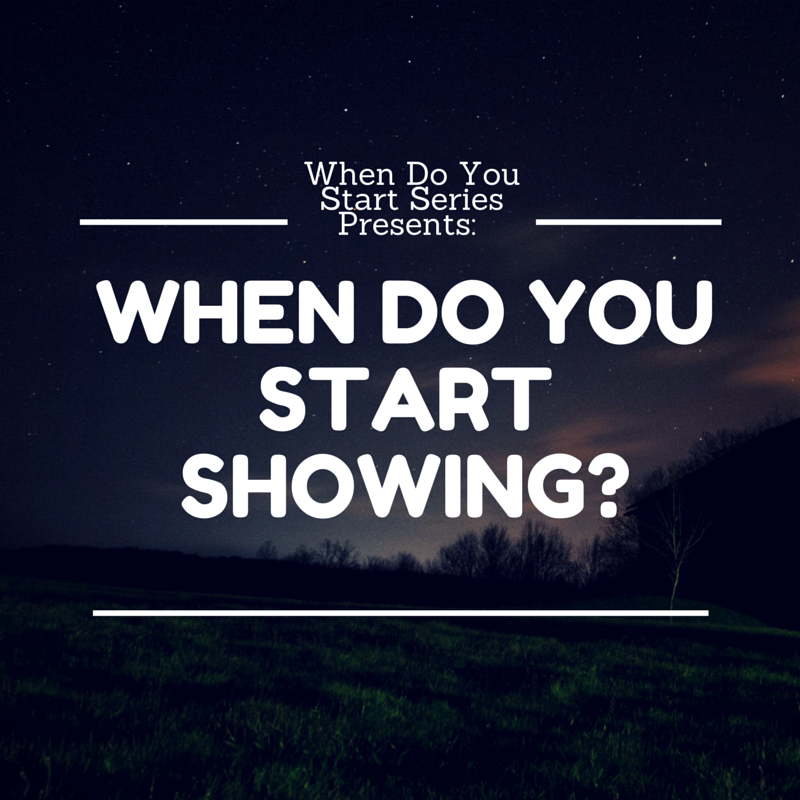