When Do You Start Feeling the Baby Kick? (Pregnancy Quickening )

Perhaps the most exciting pregnancy milestone is the first time you feel the baby kick. This first movement, which is called the quickening, generally comes shortly before the halfway mark in your term, and it is in some ways a mother’s first bonding experience with her baby.

As its muscles and bones develop, the baby gains the ability to flex its arms and legs. It responds to your movements, to the sound of your voice, and to ambient noises in your environment. As your baby grows larger, it may sometimes squirm when you sit in a position that makes it uncomfortable.

The Origin and History of the Term Quickening

The term quickening goes back many centuries. Words can change in meaning over long periods of time, and at the time when this term entered the language, the word quick meant “alive” (if you think about it for a moment, it is easy to see how quick evolved to have the meaning it has today).

To people who lived before modern developments such as pregnancy tests and ultrasound, the moment when a pregnant woman first felt her baby kick—the quickening—was the moment when the baby first “came to life.” In fact, to legal scholars of the time, the quickening marked the moment from which the right to life could be applied to a baby, and after a woman felt her baby kick for the first time, anyone who harmed her in such a way as to cause a miscarriage or stillbirth was guilty of murder. Later, when procedures such as abortion became feasible, this standard was employed to determine when this operation could be performed.

Feeling Your Baby Kick—When it May Happen

The first time you feel the baby kick will depend on the unique circumstances of your pregnancy. First-time mothers can usually expect to feel their babies kick at about 18–20 weeks. If you have been pregnant before it is apt to happen even sooner, perhaps at 15–17 weeks. In some cases the baby’s first movements may be felt as soon as 13–16 weeks from start of the mother’s last period; in others it can happen as late as 25 weeks … or not at all (see below: “What to Do if it Does Not Happen”). When patients ask what it will feel like, the best description I can give is that of popcorn popping in your stomach!

The moment when you first feel the baby move may be unforgettable—or it may be hard to pinpoint. It can be difficult to distinguish the baby’s first movements from simple indigestion, and indeed many women do mistake quickening for gas, hunger pains, or indigestion, especially if they do not know they are pregnant. Conversely, some women who suffer from a mental disorder known as pseudocyesis (otherwise known as false, phantom, or hysterical pregnancy) believe fervently that they are pregnant despite all evidence to the contrary, and these women frequently mistake ordinary digestion-related stomach sensations for the first movements of a baby.

How Often Should You Feel the Baby’s Movements?

By the third trimester your baby will begin to move much more frequently and more energetically. By this time you will probably have begun to notice patterns in your baby’s movements; he or she will have active and inactive periods (the inactive periods are usually when the baby is asleep). After week 28 you should begin to keep track of these movements. At any time when the baby is awake you should be able to feel about ten movements within a given two-hour period. If you consistently feel less movement than this, or if the baby’s patterns of movement change, call your doctor.

If you do not feel your baby kick and move, or if there is less movement than expected, this may not be cause for alarm. Some babies are more active than others, and some are fairly quiet. Once you have felt movement, it should continue. If you have not felt the baby move, and you normally do, then it may be wise to contact your doctor.

As noted above, there is a wide range of possible times when you may first feel your baby kick, but you should contact your doctor if you have reached the 25th week of pregnancy without feeling movement. This may not mean that there is anything wrong; some women never feel their babies kick or move. One reason this can happen is the position of the placenta. If the placenta is an anterior placenta—i.e., one that is near the front of the uterus—you may not feel the baby’s movements as plainly. As alluded to above, this can sometimes cause women not to realize they are pregnant, a condition known as cryptic pregnancy.

As the baby grows larger, its movements become restricted by the limited space within the uterus, and after week 32 its movements may decrease in intensity. However, the baby should continue to move. I recommend lying on your left side and seeing if the baby moves. The baby should move ten times in two hours.

Check out our When Do You Start Series:

When Do You Start Feeling Pregnancy Symptoms?

When Do You Start Feeling Morning Sickness?

Deciding When To Take Maternity Photos

When Do You Start Showing? 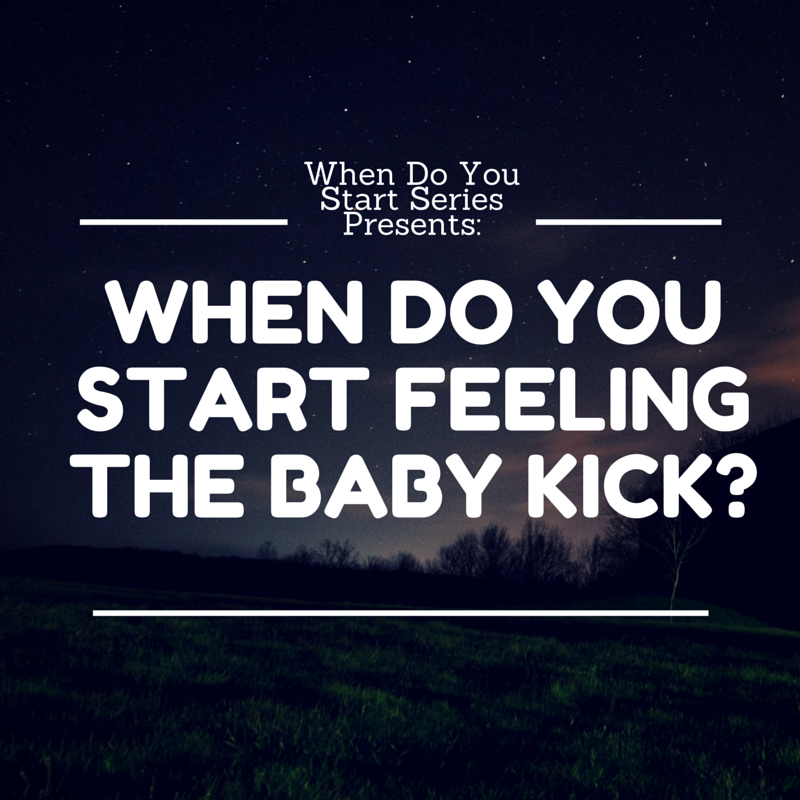