There are many noticeable changes happening to Mom’s physical appearance during this twenty-second week of pregnancy. As you make your way past the middle of the second trimester and toward the end of it, Mom and baby are growing at a rapid, yet even pace. You are past the midway point for your pregnancy term, and most of the unpleasant pregnancy symptoms have gone away.  However, new symptoms, pregnancy pains and emotions are yet to surface, so hang in there Mom!

Symptoms and Body Changes at 22 Weeks

The most noticeable change in this twenty-second week is going to be your weight gain. As your baby grows and your waistline expands, you can expect to gain close to a pound per week. If you weighed fifteen pounds more than at the start of your pregnancy last week and you have stayed on a healthy, well-balanced diet, chances are you have gained about a pound. Talking with your doctor about weight gain and weight loss during pregnancy is crucial, as each woman is different, and your weight will fluctuate differently during your pregnancy.

Unfortunately, some women’s pregnancy symptoms will not have ceased and will not cease throughout the pregnancy. For most others, however, they have pretty much disappeared. Vaginal discharge is common for all women at this stage, and is due to the increase in blood flow. You are probably able to feel your baby’s movements more frequently at this point, so enjoy this twenty-second week.

At 11 inches long and weighing just under a pound, your baby is the size of a spaghetti squash during this twenty-second week. He or she is still very thin due to the lack of fatty tissues, but this will soon change. The skin is still wrinkly and covered with lanugo, but the internal organs are growing fast and the eyelids and eyebrows are becoming distinguishable. Even the eyes have formed fully, but the irises (the colored part of your eye) still lack pigment.

The baby’s liver has started to produce the various enzymes that are required for breaking down bilirubin, a byproduct of the breaking down of red blood cells. The fetal red blood cells have a shorter lifespan, so there is more production of bilirubin in a fetus. The bilirubin from fetal blood goes into the placenta and then passes into the mother’s blood. The mother’s liver gets rid of the fetal bilirubin.

The sensory system is also developing. Your baby learns his or her sense of touch and begins rubbing his or her face, neck, torso, and legs. If you are having a girl, the uterus, ovaries, and egg cells are fully formed 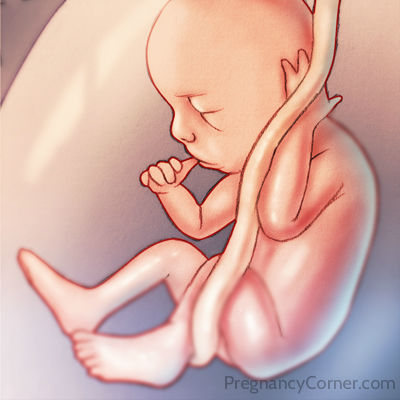 As you reach week 22, you have probably begun to look more like you are pregnant rather than putting on a few pounds. This is a time when everyone you come into contact with realizes you are definitely pregnant due to your physical appearance. Many people, without thinking, automatically reach out to rub your belly. Some moms do not care, but most feel uncomfortable with this. It is important that you know what to expect at this point, and if you do not wish to have others rubbing your tummy, then be sure to tell them so! Next is pregnancy at 23 weeks. 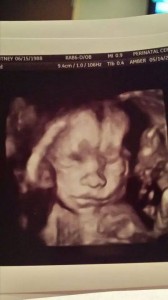