During the fifteenth week of pregnancy and throughout the second trimester, most women tend to relax a bit more. Most of the worst pregnancy symptoms, like nausea, morning sickness, and fatigue, are decreasing more and more as the days go by. The pain that comes at the end of the pregnancy is far off, so you can finally sit back and enjoy the fact that you are pregnant.

Symptoms and Body Changes at 15 Weeks

As mentioned before, the fifteenth week does not herald significant changes within your body. Many women have gained up to five pounds by this week, although weight gain varies from mom to mom.

It is quite natural if you have gained a little more or a little less than that. The toughest situation moms-to-be face during this week is that the ligaments that support the uterus are continuing to grow, causing sharp pain in the abdomen.

Your baby has grown since last week, weighing 1.75 ounces and reaching four inches in length. A fine hair called lanugo covers the skin, keeping your baby at a constant body temperature.

The lanugo does this until the baby is born, and it disappears just before birth. During the fifteenth week, many good things are happening inside the womb.

The biggest thing is that the bones in the ear are hardening, and your baby is now able to hear sounds, including Mom’s heartbeat, speaking, and breathing. Many future parents begin to put headphones on the belly during the second trimester, playing soft music to keep the baby calm.

Although the baby is moving around a lot, Mom may not be able to tell just yet, although she may occasionally feel the baby kick. She may also get the occasional hiccups. These movements will be felt more easily and more often later in the pregnancy.

Your baby is making faces, squinting and frowning, and sucking on their thumb. Since last week the arms and legs have grown longer than the head.

This is significant, since the head has been the biggest part of the fetus until now. Taste buds are forming, and the fingernails and toenails are growing longer by the day. 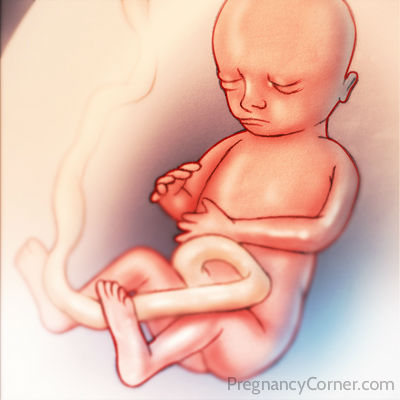 Since your belly is not yet sticking out, and you have not gained a much weight, you have not yet had to learn to walk in a new position, so this is a great week to begin teaching yourself how to sleep on your side and how to sit, stand, and walk with better posture.

If you practice now, it will become much easier later in the pregnancy, when you will be forced to do these things to relieve pain. Next is pregnancy at 16 weeks.