For most women, especially for those who aren’t planning a pregnancy, week one goes by without them realizing they are pregnant. Even week 2 may go undetected. Lots of women’s monthly cycles are variable, so most women assume that when their monthly menstrual cycle is late, it’s just that — late.

There aren’t any immediate, obvious pregnancy symptoms during the first week, but there are signs such as fatigue, loss of interest in things, mood swings, and the constant need to urinate. However, most women attribute these symptoms to PMS, rather than assuming they are pregnant.

The menstrual cycle lasts for approximately 28 days, although it can be as short as 24 days or as long as 35.

Changes in Your Body at 1 Week Pregnant

These symptoms vary from woman to woman, and most women don’t feel these changes until after the second week.

Doctors advise that the first week of pregnancy is your “get out of jail free week.” If your diet isn’t perfect, or if you have a glass of wine with dinner, your pregnancy isn’t likely to be significantly affected.

During the first week of pregnancy there’s no major development of the baby, other than the egg leaving the ovary and traveling to the fallopian tubes. You’re not actually pregnant at this time, since conception itself doesn’t happen until about two weeks after your period ends.

Still, this week is included in the pregnancy calendar to help the doctor calculate the first day of your last monthly menstrual cycle. It’s from this day that the nine-month cycle (or 40 weeks in medical terms) is calculated, and your EDD (expected due date) is determined.

Once the egg is fertilized, the cells begin to divide over the next seven to ten days. During the first week the “baby” is called a blastocyte. You can break the blastocyte into two parts — the external part of this blastocyte will become the placenta, and the internal part will be the embryo during the second week of pregnancy.

If more than one egg gets released and fertilized, multiple zygotes may form. The zygotes have 46 chromosomes, an equal number from each parent, and the chromosomes have genetic material in them that determine the baby’s sex, hair color, features, skin color, height, and eye color. 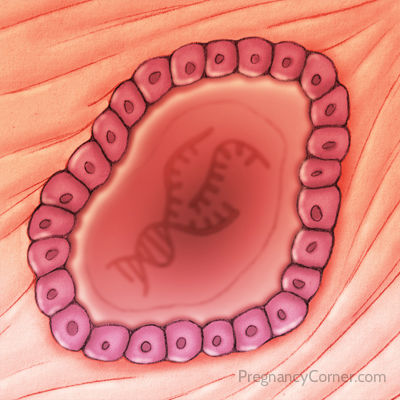 If you are planning to get pregnant, the first week will be one of joy and anticipation. If you’ve been monitoring your morning basal body temperature, you will see that your temperature remains elevated beyond day 16 of your luteal phase (post ovulation).

This is the first physiological sign that you’re pregnant. Take this time to contact your obstetrician to set an appointment, and change your eating and physical habits if you haven’t already done so.

If you take medication and have not already discussed it with your doctor, this is the time to contact your doctor and ask questions, such as whether it’s okay to continue use of your medication throughout your pregnancy, or if you need to switch or quit your medication all together. Also, if you haven’t already, you can begin taking vitamins and minerals such as folic acid.

Want answers now? Check out what happens during the 2nd week of pregnancy.